JET A-1 is an aviation fuel formerly known as "kerosene" which is suitable for most jet aircraft.

It meets stringent international requirements, particularly those of the latest versions of the AFQRJOS, the British DEF STAN 91-91 standard, the ASTM D1655 standard, and the NATO F-35 specification.

It has a minimum flashpoint of 38°C  and a maximum freezing point of -47°C.

JET A-1 is the principal fuel used for jet turbine engines. It is also used in general aviation for compatible diesel engine planes. TotalEnergies​, a market leader in Europe and Africa, has been a supplier of Jet Fuel to the Aviation Industry since 1955. Get your free TotalEnergies fuel card ! 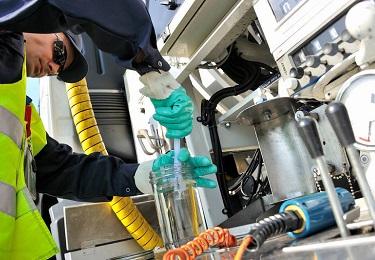 Misfuelling means delivering the incorrect grade of fuel into an aircraft.

The risk of delivering the wrong grade of fuel exists for general aviation aircraft, and for some wider bodied aircraft that are overwing fuelled, and may therefore mistakenly be fuelled with avgas or jet fuel.

There are many similar looking aircraft in operation internationally, where visual appearance alone is not enough to identify the required fuel. In some cases, existing aircraft originally designed for aviation gasoline are being converted to jet fuel. In addition, the filling ports on modified aircraft may not have been replaced with the larger diameter fuelling ports dedicated for jet fuel hence increasing the risk of misfuelling.

AN INTERNATIONAL SALES TEAM AT YOUR DISPOSAL